Romania, a country with fascinating places, charms through its geological, geographic and cultural diversity and invites people to come back for a visit. Each time one can discover other impressive places, stories and things.

One of these wonderful places is the County of Buzău, located in south-eastern Romania, one and a half hour away from the capital city, Bucharest.

Several unique and charming tourist attractions can be visited here. Starting from medieval monasteries, rupestrian settlements, “fires” coming out of the ground, up to spectacular geological phenomena such as the living stones – the trovants in Ulmet or the Muddy Volcanoes.

The Muddy Volcanoes, located in the central area of the Curvature Subcarpathians, close to the commune of Berca in the department of Buzău, bearing suggestive names such as the muddy volcanoes at Pâclele Mari (Big Muddy Volcano), Pâclele Mici (Small Muddy Volcano), La Fierbători and Beciu, are included in a geological and botanical natural reservation of national interest. 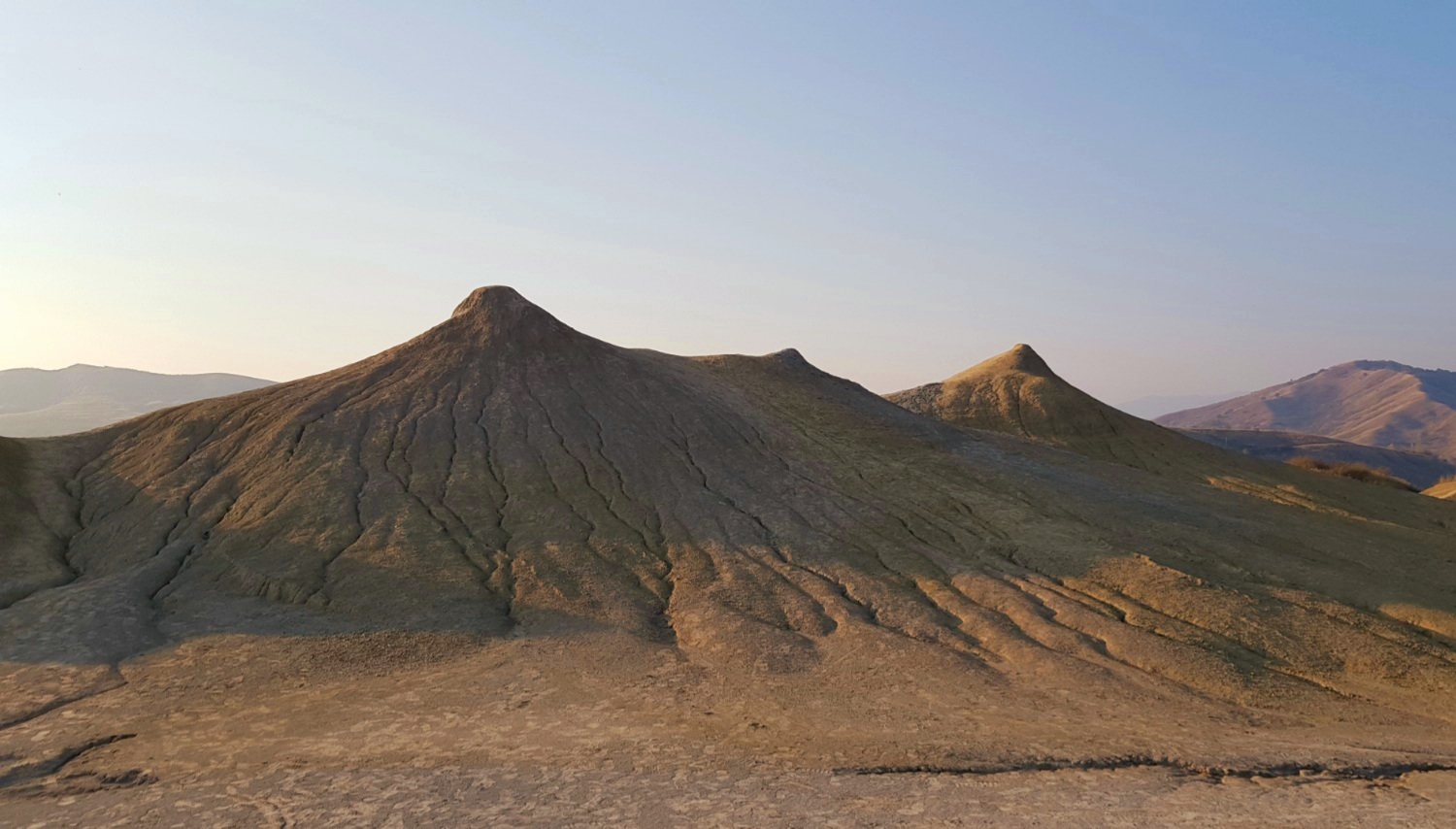 Altogether, the entire natural, cultural and historical heritage covering 1036 km2 qualify for the creation of the Buzău County Geopark, a sustainable development territory aspiring to the title of UNESCO Geopark.

The first attraction the traveller meets is Pâclele Mari, covering about 15 hectares. As it very accessible to the public, it receives the largest number of visitors.

Arriving there, the tourists gets a moonlike image, as the eruption of these volcanoes created hardened mud cones of various sizes, some in miniature and some other impressive by their dimensions.

The high concentration of craters across a relatively small area contributes to the uniqueness of this place in Romania.

A geologist at the University of Petroșani explains this phenomenon for balkazaar.com

“The spectacular phenomenon appears due to gas emanations originating at a depth of some 3000 m, where there are together hydrocarbon and salt deposits, thus explaining the existence of sulphurous and salty lands at the surface of the plateaus, along with halophile vegetation. Generated in these particular geological conditions, natural gases travel along the cracks and fissures in the substrate, and at the final part of their ascension they drive the underground water. With this, they dissolve the clayish and marly rocks they come in contact with, throwing them above the ground in the form of liquid mud”, explains Ph.D. En. Csaba R. LORINȚ, dean of the Environment Engineering and Geology Department within the Faculty of Mines at the University of Petroșani

The mud eruptions are cold, therefore completely harmless, and create a spectacular relief at the surface, which in the eyes of the tourist may give the impression of boiling earth. Together with the metallic smell exhaling from the mud craters, the entire image of the place, carved by the numerous canyons dug by rains, carries the tourist through a seemingly unearthly landscape.

A visit to Pâclele Mici is also a chance not to be missed. Even if slightly more difficult to get to as compared to Pâclele Mari and covering a somewhat smaller area, 10 hectares, they will not disappoint the visitors who will have to climb a slope of about 500 metres to arrive at this place. Here, tourists are less numerous, even if the craters are more dense, more active and more spectacular.

The access to the Muddy Volcanoes reservation during summer is allowed daily between 8-20. When raining, access is forbidden as rain makes the area impracticable.

The Muddy Volcanoes at Pâclele Mari are reachable by car up to the entry gates, where there are parking places. As concerns Pâclele Mici, there is a toll parking, from tourists have to walk about 1 km, to the bottom of a hill. In both cases, climbing is inevitable, but the scenery is rewarding for any tourists having reached there.

The image of this place never leaves memory, as part of a wonderful tourist escape the County of Buzău offers through its numerous legends, traditions and local gastronomy.