New Year’s Eve, the period before and after it, is a time strewn with traditions and customs deeply rooted in the history and culture of the Balkan countries. More than that, one can certainly say that December is a month of unique traditions, for which many regions in Romania are recognized all over the world.

A millennial tradition originating in an ancient Indo-European tribe, known as the Geto-Dacians, is still being kept alive by the Romanians, especially in certain areas of the country.

The Bear Dance is unique worldwide and has a strong signification ever since the times of the Geto-Dacians, who saw it as a sacred animal, as an “absolute being” which had the power to “die” in winter and “resurrect” in spring. According to the Romanian mythology, the bear has the power to protect and heal. This is exactly why Geto-Dacians anointed newborns with bear fat, to give them strength, good luck and to protect them from diseases. Moreover, when a person fell ill, their name was changed to: Urs (bear), Ursache, Ursula, to help them recover as quickly as possible. 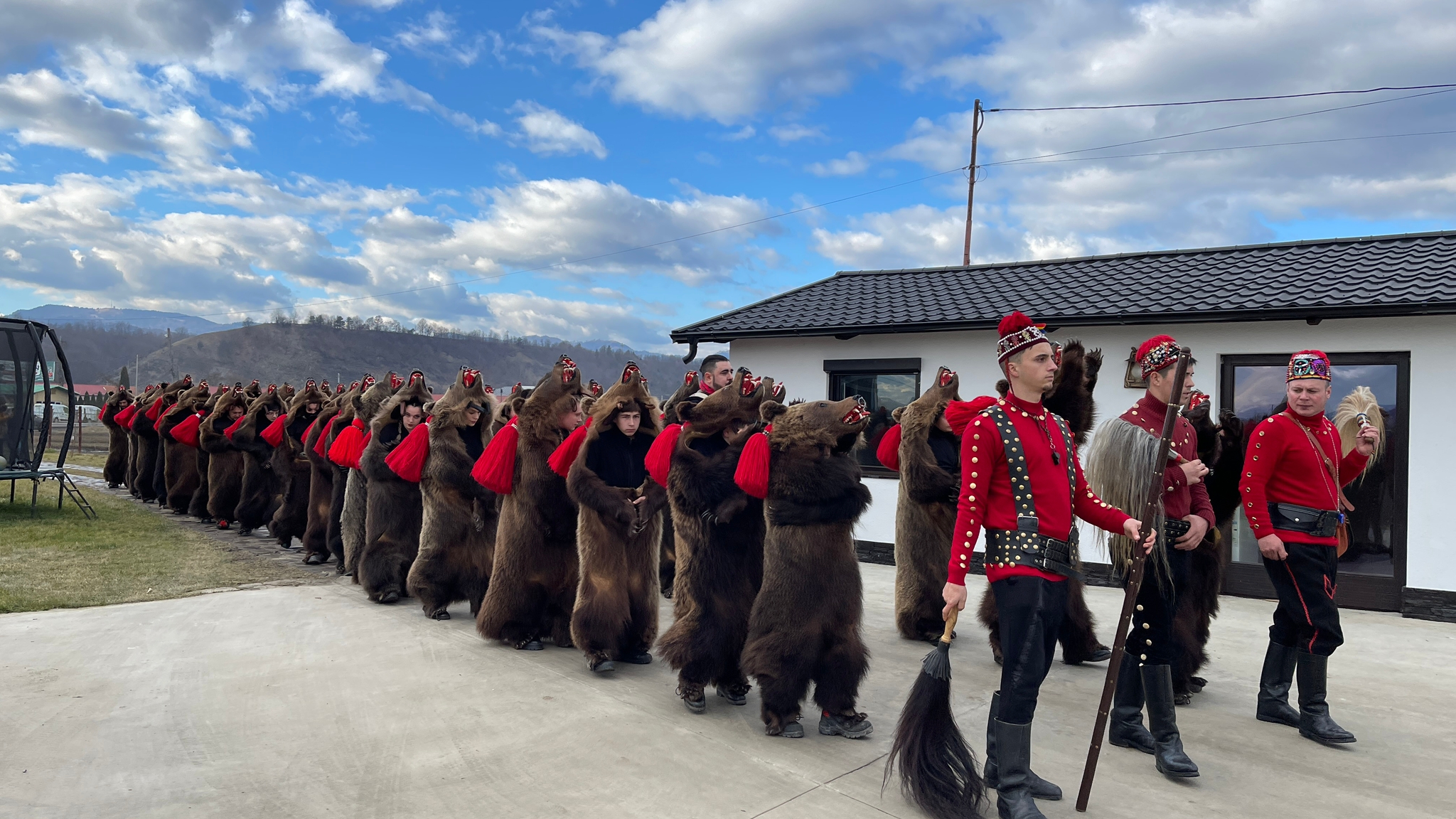 Another legend related to bears is the “bear’s tread”. Centuries ago, in certain areas of Romania, people would go from house to house with bear cubs. These would climb on the villagers’ backs to ease their back pain.

They say the bear wards off evil spirits and brings only joy and abundance to the people who welcome it into their households. A unique show of dance, color, sound and fun is organized every year in the Valley of the Trotuș River by the Ceata Urșilor (Band of Bears) from Comănești Şipoteni.

It is wonderful to see how people from all over the Trotuș Valley gather year after year for the Bear Dance. There are 7 Bands of Bears in Comăneşti and this year, however, we had the joy of personally coming closer to the story of the Bears from Comănești Şipoteni. Throughout the month of December they travelled around the country and offered a traditional show, full of good energy, to all the residents and tourists who had the opportunity to encounter them. 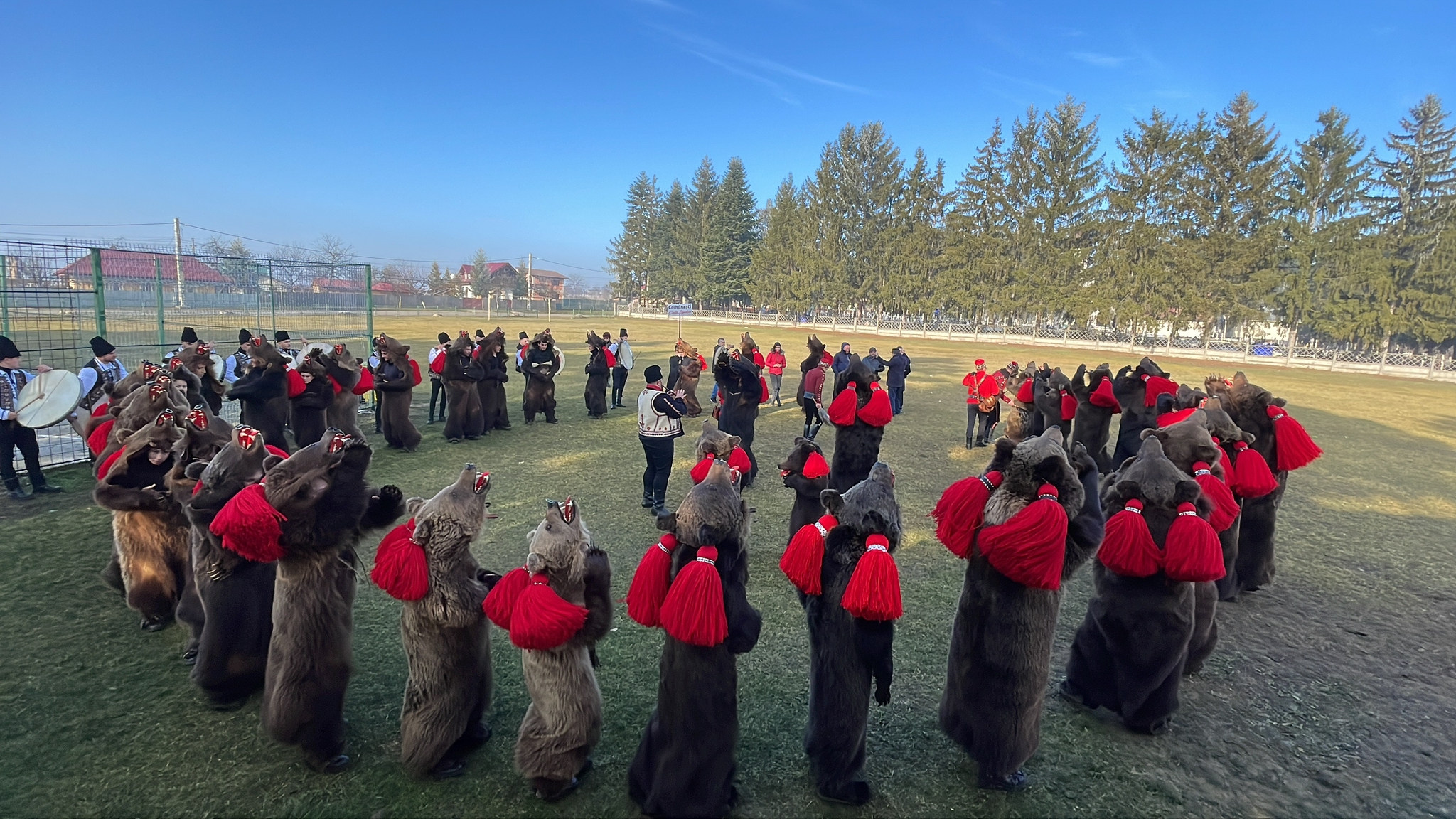 With great enthusiasm and joy, we found out that the “Bears” come every year to festivals as well as in people’s households, since they were mere children. Now, as adults, they pass the tradition on to their children. We were impressed by a “Bear Cub”, only 4 years old, happily and proudly wearing the traditional original bear costume.

The bear skins are passed on from the ancestors, they all come from the Trotuș River Valley and are maintained with great care. Kept in the dark, protected from moisture, treated with special fur oils and substances to protect them against death-watch beetles and moths, they can easily be seen as a treasure. They weigh between 15 and 40 kg, depending on their size, so they can be adapted to the age of all Bear Dancers. Some of them are really too old and are being restored, piece by piece, and this is where real art comes in, as they must be cut, oiled, trimmed and painted.

Each bearskin is ‘adorned’ with 2 large red woolen tassels, which are said to protect against the evil eye. 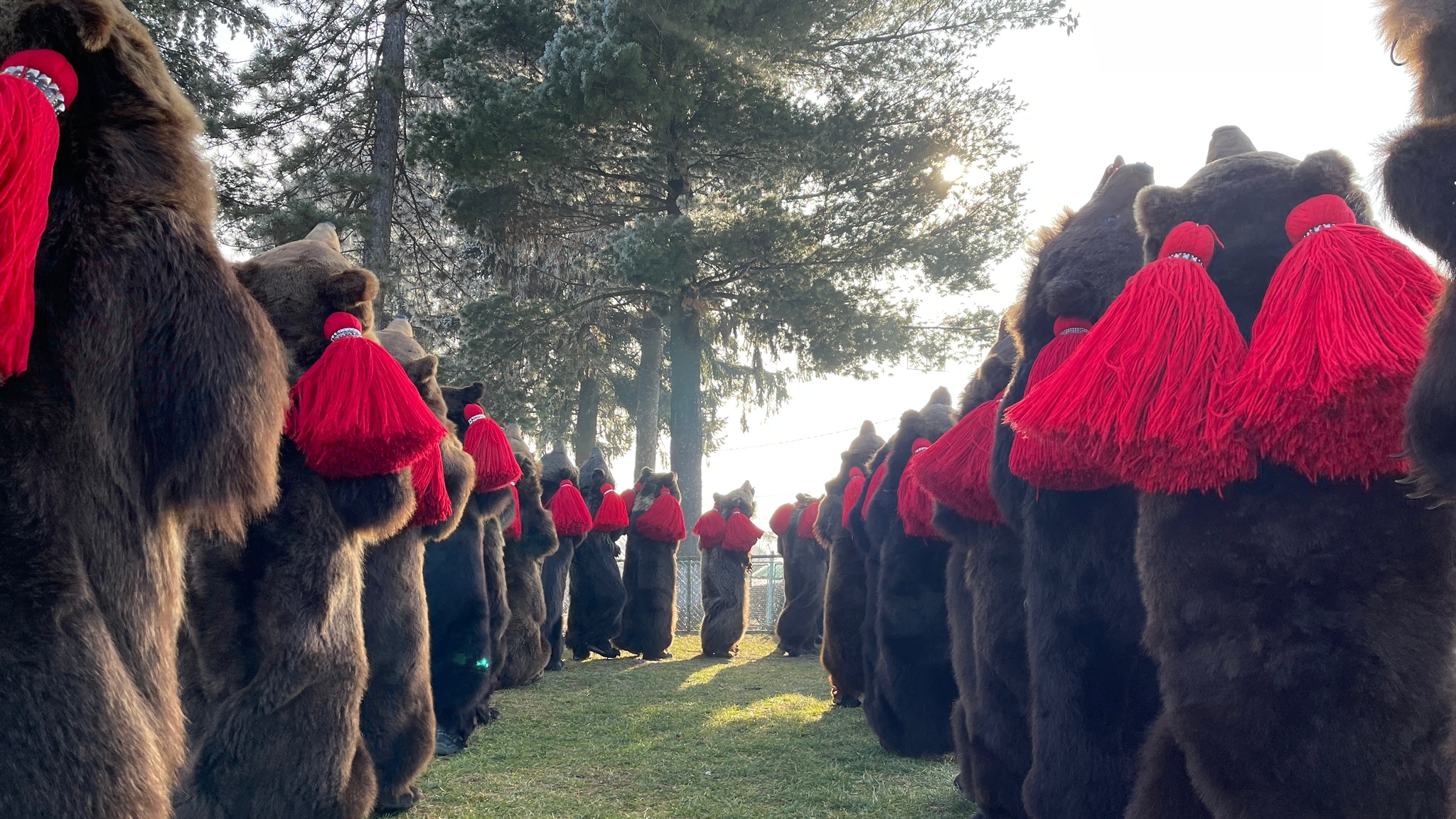 Every year, the Bear Dancers prepare several months in advance for the specific dances of this tradition. The beating of the drums, which is also meant to drive away evil spirits, is the traditional one from the Trotuș River Valley and evokes the regeneration of nature, the passing of the seasons and the power of the bear that “dies” during the dance and then “resurrects”. The death and resurrection of the bear suggest its strong ability to overcome the harsh winter and herald the coming of spring.

This is one of the most famous Bands of Bears of Romania, which had a significant contribution to apply at the future registration of this unique custom as an UNESCO World Cultural Heritage, due to its authenticity. 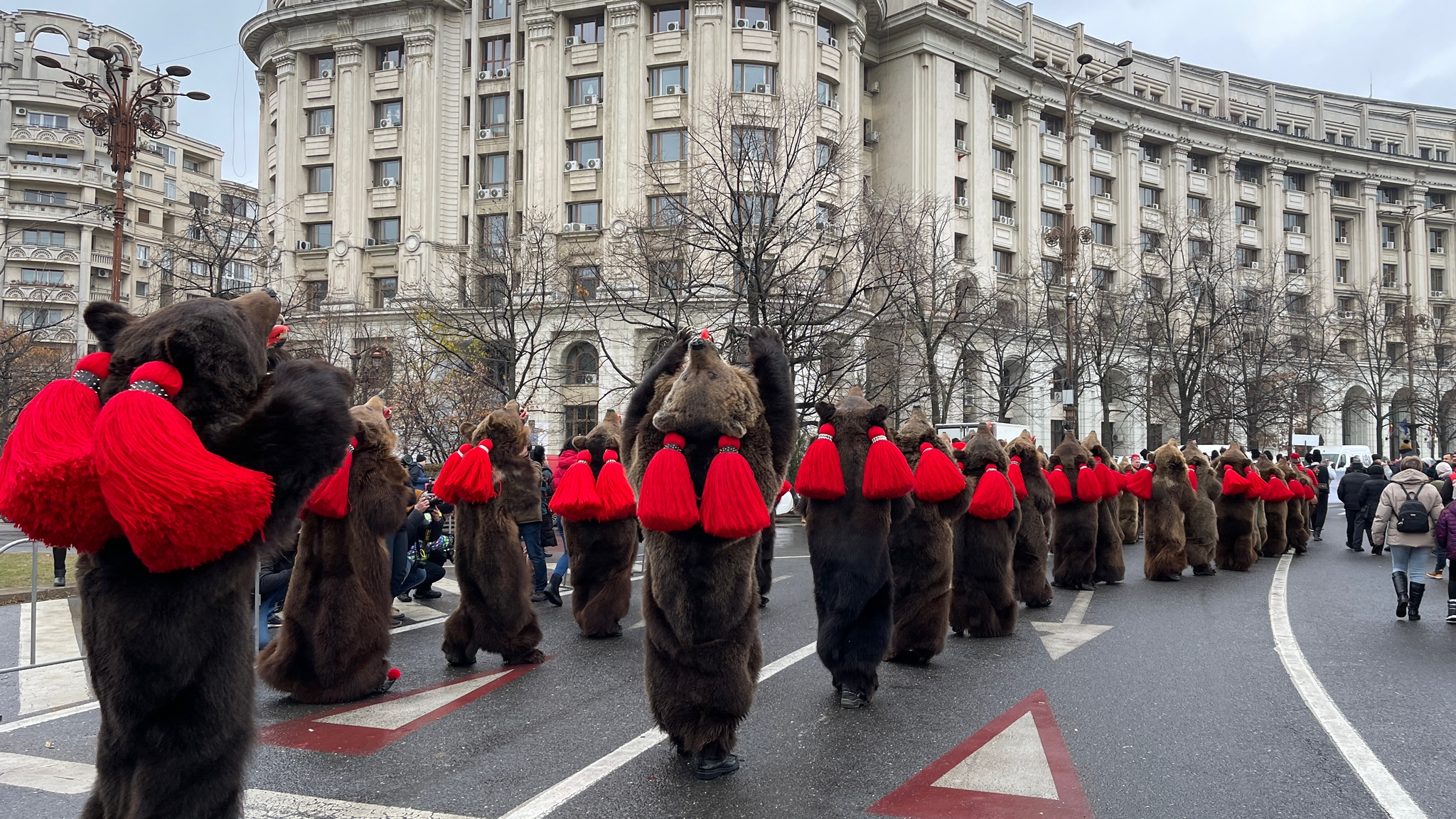 Despite the strange and sometimes difficult times we lived through and maybe still have to cope with, these traditions have not disappeared from Romania, and the cultural heritage of the Balkans is richer also thanks to the people who have kept these traditions alive in their souls.

In today’s Romania, the Bears from Comănești Sipoteni still dance to the rhythms of the drum with the same crazy frenzy as always and still gather around them thousands of tourists from all over the world.

Thank you dear people, for reminding us of our ancestors and being a joy in our sight, hearing and heart with all that you do. 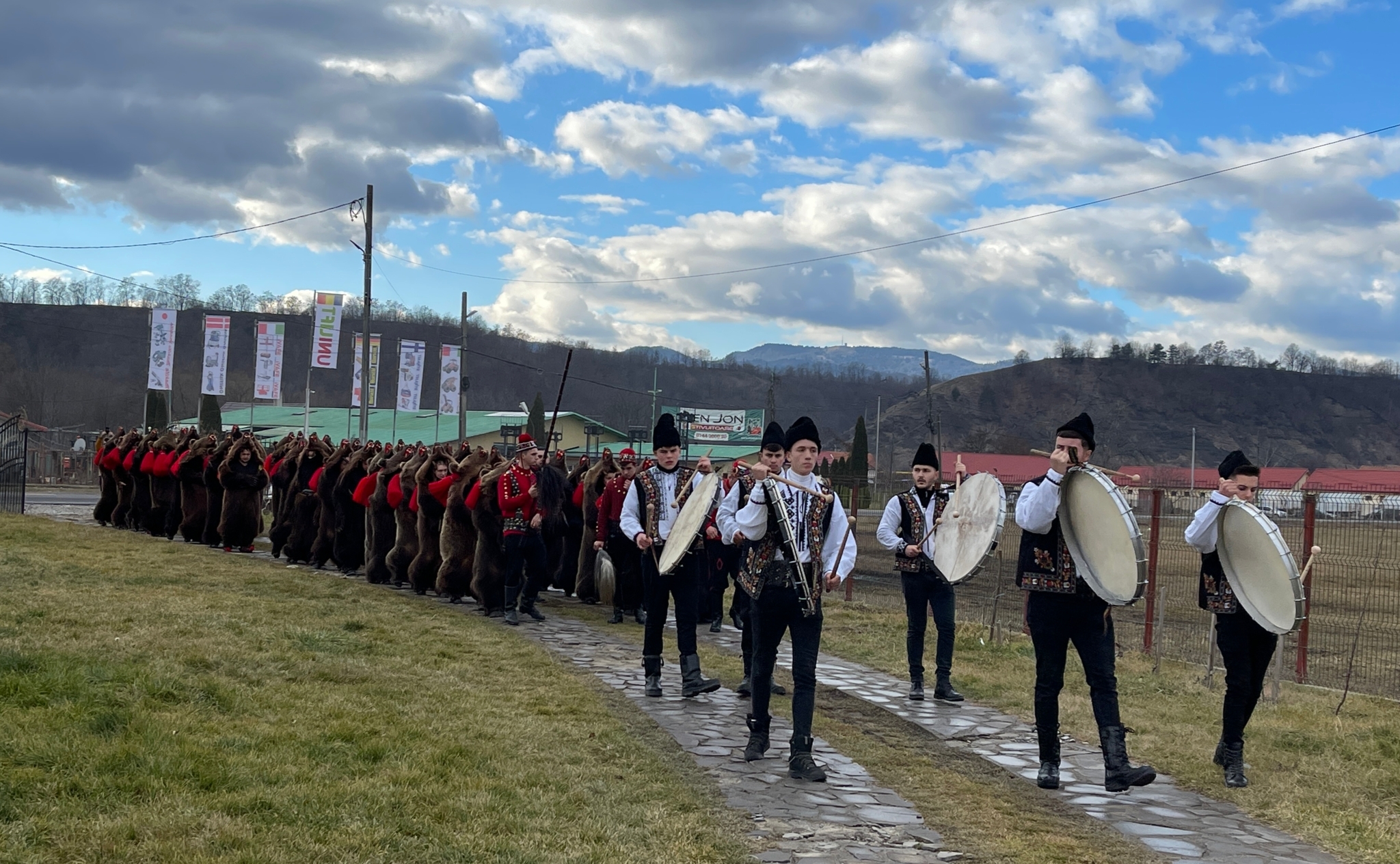