The history of the Romanian people is a very rich one, with legendary characters, who are not just confined to the history books, but “came to life”, in different forms, in many regions of Romania.

One of these fascinating characters is Decebalus – the last king of Dacia and the leader of Dacia’s armies in some of the toughest confrontations of the Ancient World. He ruled for two decades and went down in history as a formidable opponent, even for the Roman Empire. He led the two Dacian wars, and at the end of the second, despite their strong resistance, the armies of the Dacian king were defeated. In order not to fall alive into the “hands of the enemy”, King Decebalus chose death instead of slavery and committed suicide – the scene of his suicide is carved on Trajan’s Column in Rome.

Although more than 2,000 years have passed since his death, his spirit has not disappeared and was “brought back to life” in the 90s, in an impressively beautiful area of ​​Romania.

Near Orșova, at the turn of the Small Danube Gorge, Decebal’s Head stands guard as a colossal stone sculpture, measuring 55 m (180 ft) high and 25 m (82 ft)wide. It is an impressive sculpture, which cannot be overlooked when you arrive in this area.

The Head of Decebalus is the tallest stone sculpture in Europe and the second in the world, 8 m (26 ft) higher than the Monument of Christ in Rio de Janeiro and 6 m (19,6 ft) less than the Statue of Liberty.

The location chosen for the creation of this impressive sculpture is effectively breathtaking. The river meandering between the beautifully forested rocks, seemingly under the “rule” of the great Head of Decebalus, seems to take us into a fairytale. It is assumed that this place was selected not just because of its beauty, but also because near it, on the opposite side of the Danube, on the Serbian shore, is the Tabula Traiana – a monument erected by Emperor Trajan, Decebalus’ “opponent”, after his victory in the second Dacian war.

The story of Decebal’s Head began in 1985, when Iosif Constantin Dragan – a Romanian businessman and amateur historian – came up with the idea for the sculpture project – he chose the 128 m high rock which was to be transformed into a work of art. The work began almost 10 years later, in 1993 and it was an adventure for all those involved in its creation.

The point where the rock is situated was an aspect which made things difficult and turned everything into an unforgettable adventure, because heavy equipment was out of the question and all the materials were brought by boat and then carried step by step, in heavy bags of dozens of kilograms.

The Romanian sculptor Florin Cotarcea, together with 11 other sculptors – climbers worked for 10 years in order to complete this bold project. It all started with the creation of detailed sketches of Decebal’s face which was to be carved, then rock samples were taken, to check the quality of the rock.

When everything was set up, the deforestation of the trees that covered the rock began by small and safe steps, followed by the renoval of the rock debris which could endanger the lives of those involved in the project and then the sculpture itself.

The sculptors-climbers used dynamite to blow up large pieces of rock, but they used the classic tools of the trade for details: the pneumatic hammer, the sledgehammer and the spike. The detail that caued the greatest difficulties for the sculptors was Decebal’s nose, which cracked and was in danger of falling due to vibrations and to the rock which had begun to grind. In order to secure everything, the affected area was reinforced with concrete and rebars, this being the reason why we note a different color of the sculpture in that area.

The work conditions were difficult and even risky, given the dangerous height, the summer heat, which made everything unbearable, added to the specific dangers of the area, which included vipers.

As in any adventure, small incidents took place here as well, from which the climbers escaped with minor injuries, even after a viper bite and a fall of a few meters into the void.

With their heavily carried and lifted equipment, dynamite, spikes, sledgehammers and pneumatic hammers, with a lot of patience and confidence and especially with a team of brave and talented sculptors, Decebal’s Head reached its final form in 2004.

Under the sculpture you can see the inscription in Latin – DECEBALUS REX –DRAGAN FECIT (King Decebalus – Made by Dragan).

The sculpture of Decebal’s Head is the impressive way by which Iosif Constantin Dragan, the Romanian amateur historian, so passionate about the protochronist movement, “showed” Decebalus as a national hero who left his mark on the development of European cultures.

Today, Decebal’s Head is one of the most important tourist attractions in the area, being appreciated by both Romanians and tourists from all over the world who get to see it. This is a place where the charming beauty of nature is fused with the most distant historical moments of the Romanian people. 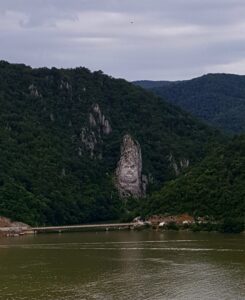