The coronavirus pandemic seems to be at an end… However, an article on this topic is worth writing because past events aren’t just dusty pages of history, but situations which should help us better understand the present and determine us to learn from the past so as to avoid making the same mistakes in the future.

The phone’s alarm can become bothersome to the human being when it repeatedly annoys the hearing of a person desperately wishing to escape from the daily routine and write down their innermost thoughts about isolation. This desperate wish is obviously not born from a tendency towards introversion, but rather from the need to understand why the coronavirus pandemic has brought about so much hysteria among people.

And how is it that the ringtone which wakes you up is called Home Coming?! Not only does it wake you up, but it also annoys you because of its insistence, as if it were a pestering lover in the thralls of jealousy. You stop it once, thinking that it’s over, but five minutes later it continues its sonic bombardment. That’s how Home Coming turns into Home Leaving, roughly speaking.

Getting up is a challenge. Having done that, I walk slowly into the kitchen, as happy as a child when I think of the thirty minutes I still have before going to school. I’m thinking, of course, of children nowadays, who have to lug so many books only to go to a place where they are taught how to memorize information. The coffee maker tells me it’s time to stop thinking compassionately about the little ones. The smell of coffee postpones for a short while the moment when I’ll be thrown into a community where each and every one of us is a doctor and knows everything about the pandemic.

This half hour serves as a moment of reflection regarding everything that should be written down. My mind flies towards the lepers of Spinalonga and Tichilești. Spinalonga is a small island to the east of Crete and is known as the island of the lepers, because the Cretan lepers, as well as those from the rest of Greece, were isolated there from 1903 to 1957. Today, Spinalonga is visited every summer by thousands of tourists who want to see the dwellings in which the lepers lived, dwellings which archaeologists are desperately trying to preserve. The same prophylactic measures were also enforced on Romanian territory in 1897, when the Romanian medical authorities decided to found a lazarette in Răchitoasa, in the county of Galați, which was moved at the beginning of the 20th century to Tichilești, near Isaccea, in the county of Tulcea, in Dobrudja. In 1916, the Bulgarian occupants of North Dobrudja destroyed the lazarette. Between 1918 and 1928, the lazarette operated at Lărgeanca, in Bessarabia. In 1928, the lazarette was moved to Tichilești. Since then, it has continuously operated.

It’s impossible not to ask myself what divine force kept them fighting not only the disease, but also the social stigma. I’m obsessed by the idea that these outcasts were rejected even by their own families, and now, a century later, we also end up rejecting our loved ones because of sanitary reasons, as if we don’t acknowledge that history is important precisely because it repeats itself in another form. The light at the end of the tunnel appears… people don’t know their history, their past, and that’s why they can’t learn from mistakes long gone. And yet I’m once again overwhelmed by a feeling of desperation when I remember that my friend Gabriela – who knows the story of the lepers very well since I’ve recounted it to her countless times – casually told me last week that it would be better to wait until the situation is more stable and meet up after that. A few days later, a meeting of corporate workers back at her place no longer presents the same risk of contamination. If we are to take into account the part where she told me I should deprive those innocent children from the kindergarten of warm hugs or mentioned my possible resignation due to sanitary reasons, we reach the conclusion that reading historical texts is not enough – we must fully understand them. The fad of invoking functional illiteracy when analyzing people causes me unspeakable irritation. I would emphasize perhaps just a shallowness in people’s thinking: when they consider a situation in which they aren’t directly involved, they analyze it through the lens of criteria favorable to the disadvantaged classes, but when they are confronted with the same situation, they treat it based upon criteria which favor them personally. It’s the perfect paradigm to define a social class of left-wingers who are adepts of such tendencies only because it’s fashionable. Conversations we’ve had about women’s rights, equality and social justice pass through my mind. It’s becoming more and more clear to me that in the face of death we’re completely naked, completely deprived of any ideas imposed upon us by a progressist society.

I was thinking of reducing everything to the term bourgeois, when to mind comes once again the Tichilești lazarette in its primitive form, the way doctor Nicolae Romanescu found it after 1955 and how he transformed it from a tribe of lepers into a full-fledged hospital. The emergence of this doctor in a bourgeois family brings before my eyes the oldest events in the history of Romania in which the members of the Romanescu family took part: the Battle of Drăgășani and the 1848 and 1821 Revolutions. However, the most intriguing aspects are the strong will this noble doctor exhibited when facing isolated, primitive-minded people like the sick in the lazarette, as well as the social status which a physician of his standing took on during the Communist regime, namely that of a doctor of outcasts isolated from the rest of the world. The simple fact that his efforts to integrate these downtrodden people into society were rewarded with a complete lack of gratitude on the part of those sick makes me smile when I think this could form the basis of a novel. And when I think that doctors nowadays are treated in the same way by suspicious patients who are sure that behind every act of goodwill on the physician’s part there is a hidden motive, I realize that since the last century all that we’ve managed to do is buy some new clothes and smartphones and build some shopping malls. At our core, in the face of death we are as primitive-minded as before.

The calm state in which I was thanks to writing down these thoughts in a more or less orderly fashion is disturbed by a quick glance towards my phone which shows that it’s much later than it should be. I’m at the door straight away, in a state of emergency both literally and figuratively. Another day had passed in which I hadn’t written down the ideas which consumed me. I become even more irritated as I run to catch the tram which I see is fast approaching. It’s as if I’m reading the second part of Moromeții, the post-war social novel written by the Romanian author Marin Preda, in which time had no more patience towards people, without having thoroughly enjoyed the first part, in which time had patience towards people. The mask turns out to be even more hostile than the phone’s alarm. I already feel as if I’m struggling to breathe. I hastily break into that clump of wrapped-up people and my eyes paradoxically turn towards the phone of the person on my right, who is reading an article about social distancing. My panting turns into an unbearable cough, which leaves me almost breathless. The first doctor wastes no time showing up. I feel the stern gaze of a middle-aged lady right in the back of my head. It’s very clear to me that a diagnostic has been reached: I’m a positive covid case! For a moment, I feel like my bouncing back and forth between the two worlds makes me reach hasty conclusions and I turn around just a little to see if I’m right or not. It appears that even though smoking and running don’t go well together, combining them doesn’t affect one’s capacity to figure out what’s happening. The two stops until the subway station seem to take forever. 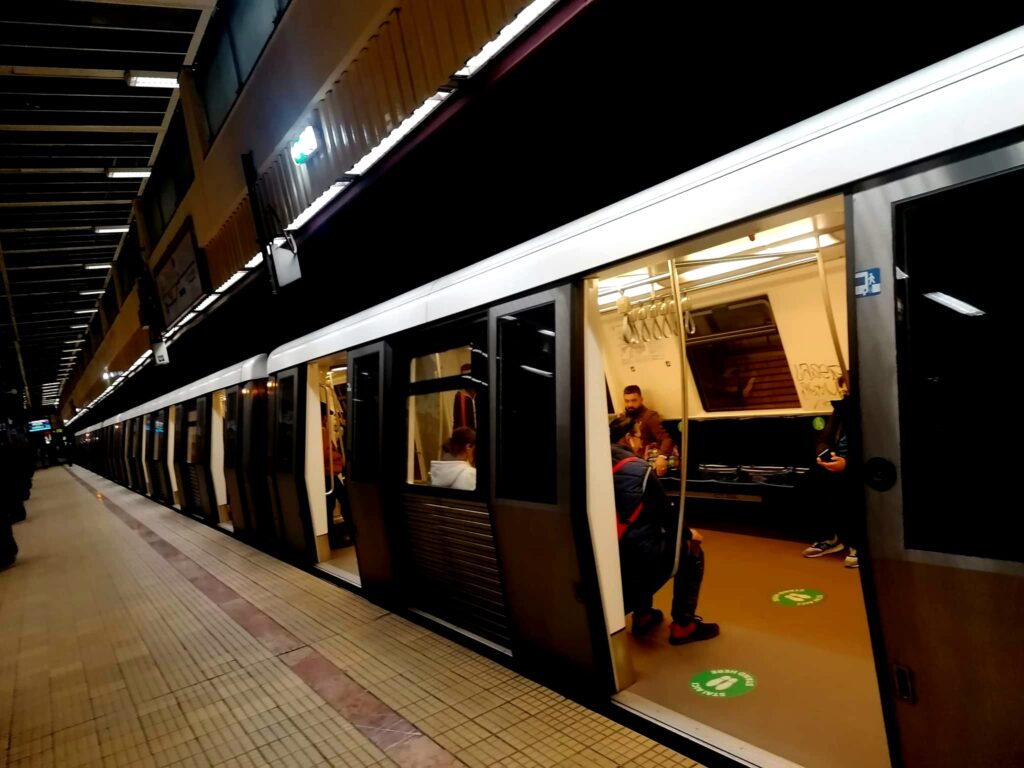 The last shall be first. Therefore, I get off, I take off my mask with the speed of light and enjoy the first breath of fresh air, just like a newborn would. And since at birth there are also doctors present, I notice I’m a bourgeois child, flanked by two doctors staring at me. I’ve broken the sanitary norms and I’m breathing fresh air. A mighty sin – I was worthy of being crucified in the Agora. I hastily walk towards the subway, keen on shielding myself from any insistent looks and listening to the most beautiful Greek songs. Fate has decided I deserve to rest after my hectic morning, so I sit down. I instinctively reach for my headphones, but the insistent look from the woman next to me tells me I’ve broken one of the unwritten rules on the subway: when you sit down, you have to play Frozen with the person next to you. The truth is I’ve played this game many times with the little ones at the kindergarten where I work, but I’ve got used to letting them win. Therefore, I gently touch the lady sitting beside me, obviously disgruntled. Like any left-leaning citizen who is a member of the party, I can get over any feeling of revolt which this kind of behavior elicits in me, but I can’t pretend not to notice when right before my eyes I see the exasperated look on a young woman’s face. She is obviously bothered by an old man who is coughing nearby. The need to free myself from the snare of my thoughts makes me instantly lose another round of the Frozen game, take out my notebook and write.

I imagine the train stopping between the stations like in the 2019 documentary Colectiv. This valuable movie follows an investigation conducted by a group of Romanian journalists about the corruption in the Romanian healthcare system which caused the fire at the Colectiv club in Bucharest on the 30th of October 2015, in which 64 people perished and more than 150 were injured. The movie received the award for best documentary at the European Film Academy Awards and at the London Critics’ Circle Film Awards. Time has also stopped along with the train. This is the perfect opportunity for the two to acquaint themselves with each other. The old man instantly receives the role of past leper, the son of Hansen, the Norwegian doctor who discovered the etiological agent of leprosy, and that girl is visibly the daughter of the covid pandemic. I’ve started writing down entire lines beginning first of all from the conflict between generations which does so much harm to the Romanian educational system. The dialogue between the two represents the entire history of the lazarettes and of the covid pandemic. The end of the novel would have probably reached the conclusion than even the children of lepers received education in the hardest times. But what about our children? Where are they? And yet the subway is full… why?

The train reaches Pipera station, and I have to pass into the other world, to snap back to reality, to the fast-paced lifestyle which prevents me from writing down even more thoughts from the Balkans…