If you ever visited Athens, you certainly noticed the “statue” soldiers (evzones) guarding the Tomb of the Unknown Soldier in front of the Greek Parliament building (the second most visited and pictured place in Athens after the Acropolis) and witnessed at least one the symbolic ritual of guard change.

But who are these “statue soldiers”? How have they become an elite unit and a symbol of discipline? They are certainly more than an attraction for the tourists who try to make them blink in the hope of getting the best pictures for Instagram.

They are a group of elite soldiers creating the Presidential Guard of Honour. Evzonas (pl. Evzones) is a word difficult to translate into another language, as are many others in wonderful Greek. The closest meaning would be “well-girt”. The origin of their name goes back in very old times, these being mentioned both by Homer and by the ancient Greek historians.

The more recent history tells that this military corps was created on 12 December 1867 by uniting 4 infantry regiments for the purpose of defending the borders of Greece.

Throughout history, Evzones stood out due to their bravery during the two Balkan wars and the two World Wars. After the second world war, as a result of the modernization of the Greek army, the evzones, as they existed at that time, were disbanded and only one regiment was kept, with an honorific, ceremonial role.  Which is Presidential Guard. They are guarding the Presidential Palace and also, more importantly, the Tomb of the Unknown Soldier in front of the Greek Parliament.

Besides their main mission, they take part every year in 2 parades (the military parade on 25 March in Athens and the military parade on 28 October in Thessaloniki), they raise, during a special ceremony every Sunday the Greek flag on top of the Acropolis and lowers it at dawn. They also provide for various ceremonies, such as the handing of credentials to the President of the Republic by foreign ambassadors.

Although this may seem strange, evzones are not career soldiers (they are not paid for their services). They are selected based on very strict criteria among the conscripts doing the mandatory military service, lasting 9 months. Once every 2 months, the officials of the presidential guard make a selection based on physical criteria (the soldiers must be at least 1.87 m (613ft) high, mental, mobility and character criteria. The 5-week training is very tough and secret and, not surprisingly, only 50% of those selected are able to complete it. Those remaining go through an extensive programme of physical exercises consisting of marching and synchronization, resistance and stretching exercises for the purpose of learning how to raise their legs to the height of their shoulders and stand for more than 100 hours a month. They are also trained not to react to any external stimulus, are ordered to have no visual contact and not to speak to other evzones, exercising for up to 6 hours a day in front of the mirror. The entire training takes place in total silence. Since the very beginning, they are assigned a partner having very similar physical traits.

They guard together and if, for any reason, one of the partners is unable to exercise his duties, the other cannot choose another guarding partner. They also help each other put on their uniforms (this only takes half an hour). Besides the very complicated procedure to put on the socks, to secure an internal belt and to iron the bell sleeves, the evzones must be freshly shaved and their entire outfit must be extremely tidy.

The uniform of the evzones is a symbol of the national pride, representing the significant battles along the modern history of Greece. Made manually and with complicated details, it takes several months to complete (for example, it takes 6 months to completed the embroidered vest). There are two types of Evzones uniform: for officers and for soldiers. Each has a summer and a winter version. Each of them takes up to 80 days and over 30 meters of white fabric to make. The rule is that the uniform passes to the next generation of evzones, symbolizing the preservation of tradition, history and national pride.

The uniform consists of: the skirt, or “foustanella”, made of 30 metres of white fabric with 400 folds representing the number of years when Greece was under Ottoman rule. The rustic boots with pompoms (tsarouhia) weigh 3.5 kg and are made fully manually of hard red leather. 60 nails are inserted in each sole to create the sound you hear each time they march. The sound is also symbolic: the purpose is for the ancestors to hear that now the Greek are alive and free. The “fermeli” vest is embroidered with Greek traditional patterns and with the symbols Χ and O, corresponding to the first letters of the Greek words for “Christian” and “Orthodox”

Evzones guard the Tomb of the Unknown Soldier 24/7. The tomb honours each Greek soldier fallen during a battle. The change of guard ceremony is highly symbolic and elaborated, one Evzonas coming to discharge the other every hour. The ceremony involves marking several times to and fro and hitting the ground with the right foot. The movements are not random, each one being the drawing, by means of the arms, legs and rifle lifted in the air, of the Greek word “OXI” (means NO)  which is the statement to all the enemies, that the Greek are ready to die for freedom.

To prevent any hazard related to blood circulation, Evzones slowly execute the ceremonial steps after the 60 minutes when they are supposed to stand still. In their turn, the guards change their places every 15 minutes, but other than that, they must stand perfectly still. Every week, on Sunday, at 11.00 AM, there is an even ampler ceremony, when a group of soldiers marches towards the Tomb of the Unknown Soldier. There is also a fanfare marching along with the soldiers, playing traditional Greek military songs.

Any form of communication while on duty is prohibited. Although not always visible, a sub-officer of the army is present next to each pair of evzones. In case of emergency, the evzonas communicates with the sub-officer by hitting the ground with the rifle. The sub-officer then goes in front of the evzonas, asks questions and the soldier blinks once for “yes”, twice for “no” and three times for “I don’t know”. If anyone attempts to attach or touch the evzonas, or if the tourists become too insistent, the sub-officer intervenes.

Their discipline was best revealed by an incident that took place in 2001. Then, during a demonstration in front of the Parliament, a Molotov cocktails was thrown towards one of the guarding posts. This immediately caught fire, but the evzonas on duty did not even move or blink until ordered directly to do so. It is only then that one could see that his uniform was burnt and smoking on one side. In January 2010, an improvised bomb was placed 20 metres away from the place where the Evzones guard the Tomb of the Unknown Soldier, in the Syntagma Square. Although the police informed the Evzones of the imminent threat, the guards refused to leave their posts and remained on duty while the bomb exploded. On 19 October 2016, shortly after 4 A.M., a man who had covered his head threw an incendiary bomb towards the Evzones, before running away. The Molotov cocktail exploded just next to the guarding posts, but far enough from the guards.

The devotion and spirit of sacrifice of the Evzones is best revealed by the legendary Evzonas Konstantinos Koukidis, who refused to hand over the Greek flag on the Acropolis to the Nazis. He was on duty on the Acropolis on 27 April 1941, when the first German regiments reached the outskirts of Athens. The German soldiers climbed the Acropolis and ordered the Evzonas to surrender themselves and had over the Greek flag, which was to be replaced with the swastika. Koukidis refused to obey the orders of the Nazis and, after having lowered the flag and wrapped it around his body, threw himself from the top. A commemorative plaque was unveiled in April 2000 at the place where Koukidis is believed to have died. His heroism urged the Greek to resist the occupants and fight for freedom.

In the present day society, troubled by war, a medical and financial crisis, as well as by a deep crisis of the institutions, values and culture, there is something that has remained unchanged by years and disputes. An institution that bears on its shoulders, tirelessly, the history of Greece, loyal to national tradition, moral values and with a high sense of duty: the Presidential Guard of Honour, sometimes rightly called “the jewel of the Greek army”. 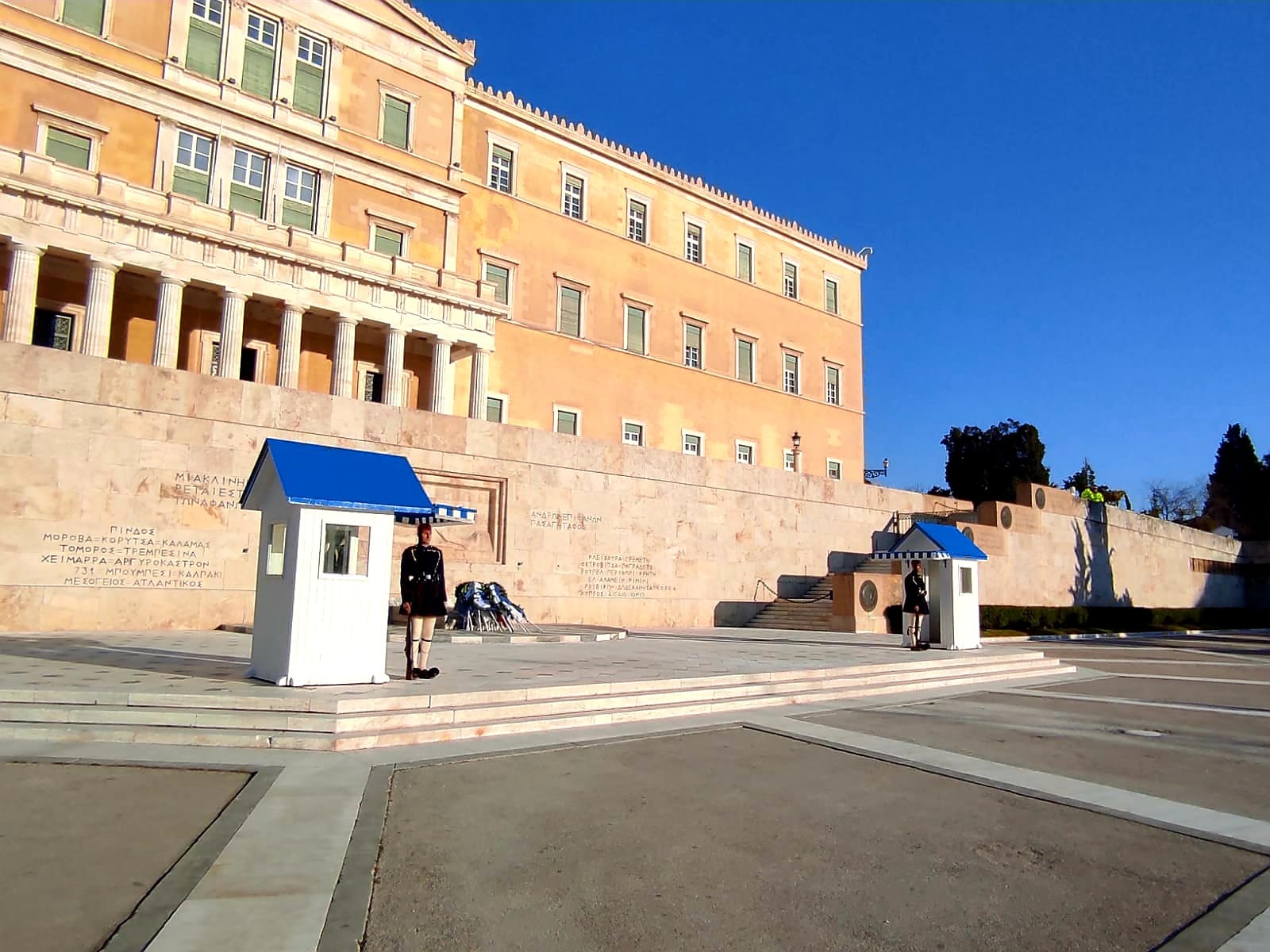