On the superb island of Tinos, one of the most beautiful of the Cyclades, in Chora (the island capital), is one of the most famous pilgrimage sites for Orthodox Christians, the Church of Panagia Evangelistria, also known as Our Lady of Tinos.

In the church there is a miraculous icon of the Virgin Mary which was found thanks to the visions of Pelagia, a nun from the island. 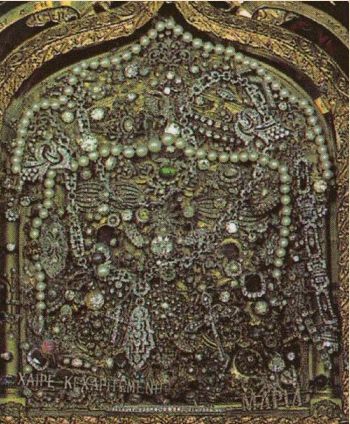 It is said that the Virgin herself appeared three times in the nun’s dreams, asking her to find the miraculous icon which had been buried for centuries.

Thus, she convinced both Gavriil, the Metropolitan of Tinos, and a large number of believers to start digging on land belonging to a certain Antonios Doxaras.

The digging started in September 1822 and the ruins of an ancient temple, as well as those of a church dedicated to Saint John Prodromos, were immediately found, but not the icon.

Meanwhile, a plague epidemic broke out on the island, so the decision was made to build a small church there. Right from the very beginning, those present saw to their great amazement that an old well which had been dry was refilled with crystal clear water.

The event was considered a miracle and made the people continue the search for the icon. Thus, on the 30th of January 1823, during the building of the church, a worker hit something with his shovel and broke it in two. Upon a closer look, he saw that it was the icon itself! Moreover, when he brought the two halves closer, they miraculously glued themselves back together.

The event was seen by all Orthodox Greeks as a miracle. Taking into account that it had taken place only two years after the start of the Greek Revolution against the Ottoman Empire, it was considered providential and many of the revolutionary leaders went to the island to worship the icon.

The icon shows the Virgin Mary praying, reading from a book. In front of her is the Archangel Gabriel who is holding a lily, a symbol of purity. The Holy Spirit descends from Heaven under the guise of a dove.

The icon is covered in gold and silver, gems and jewels, as well as various offerings made out of precious metals (or not) which represent various body parts (such as a hand or leg) left by believers who pray for their or their loved ones’ health.

Immediately after the discovery of the icon, the building of the church started. Keeping in mind that the Greek state had not yet formed, there was no central economy and the fight for freedom became more and more fierce and tragic, developing into a total war, it¬ goes without saying that the huge amounts of money necessary for the construction were nowhere to be found. Other major problems included the absence of a specialized workforce for marble, as well as the lack of building materials.

Eventually, thanks to the contributions of the islanders as well as to those of Greeks from all over the country and from abroad, the financial problem was solved. A large amount of the marble used was brought from the archaeological site from the nearby island of Delos, the sacred island of the ancient Greeks, now one of the largest open air museums.

The construction was finalized in 1880 and it is a truly magnificent edifice. The predominating white marble makes it shine both during the day and at night. When you reach the top of the hill where it is built and you turn towards the town, you can see the Aegean merging with the sky and you can feel you soul rising towards God.

You can see believers climbing the hill towards Panagia Evangelistria year-round. To the astonishment of the tourists going towards the holy building, many of these believers crawling on their knees on the specially designed path as a sign of repentance, some of them starting as far away as from the port. 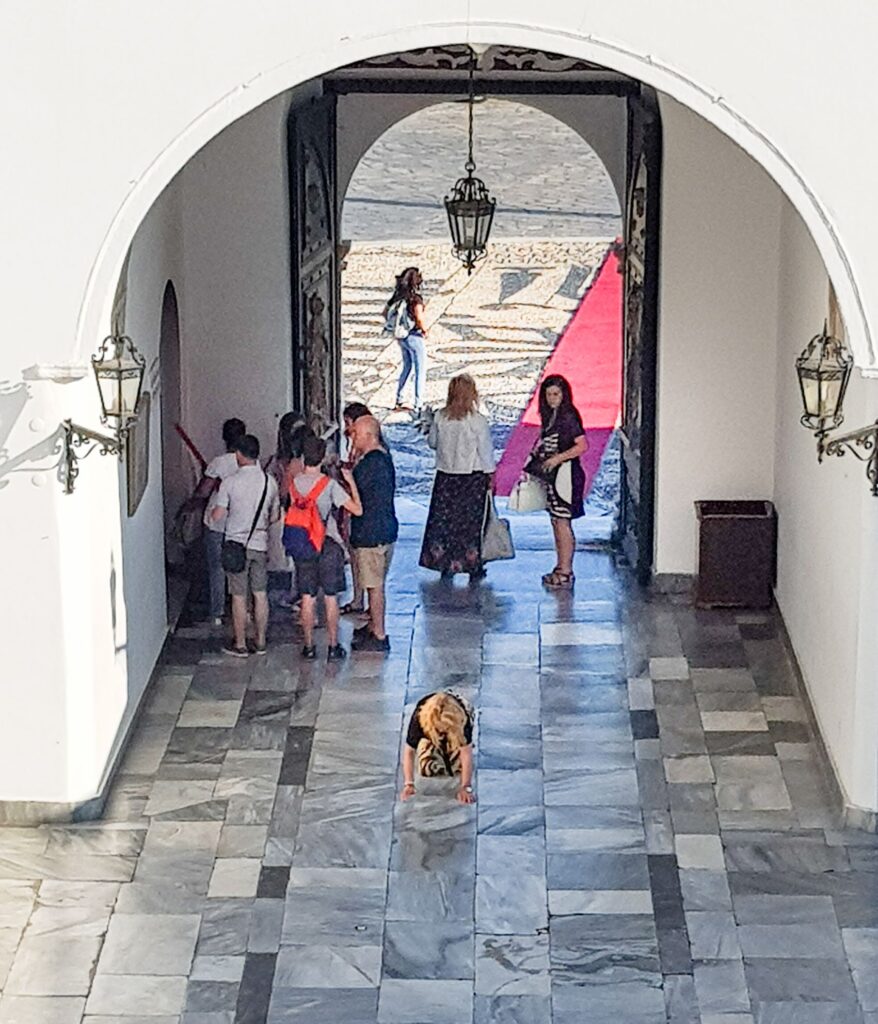 As strange as it may seem, to the believers crawling on one’s knees represents a kind of personal sacrifice and a show of faith towards the Virgin Mary so that she might heed their prayers for health, the solving of personal problems or for good grades in exams.

Crawling on one’s knees is a practice which can be seen in other places of Orthodox pilgrimage dedicated to the Holy Virgin.

The most important feast which brings an impressive number of pilgrims every year takes place on the 15th of August, the Dormition of the Mother of God.

Besides the thousands of believers, members of the Greek government and army are also present, and at the end of the liturgy the procession of the icon takes place.

The icon is set in a baldaquin and is carried on the shoulders by members of the Greek military navy since the Virgin Mary is, among others, also considered a protector of sailors. Representatives from the other arms of the Greek army follow them.

Besides the impressive church, visitors can also see the small church of Zoodochos Pigi – Evreseos (of the Life-Giving Spring – of Finding) which is located right underneath the bulding of the main one.

That is also the place where the icon was found and the well was miraculously refilled with water. Believers cand take a handful of the earth which for so many years covered the icon, as well as holy water which is said to have healing powers. The holy water flows from a small fountain in the temple near the place of the Finding. A part of the pre-existing church of Saint John Prodromos can also be seen there. 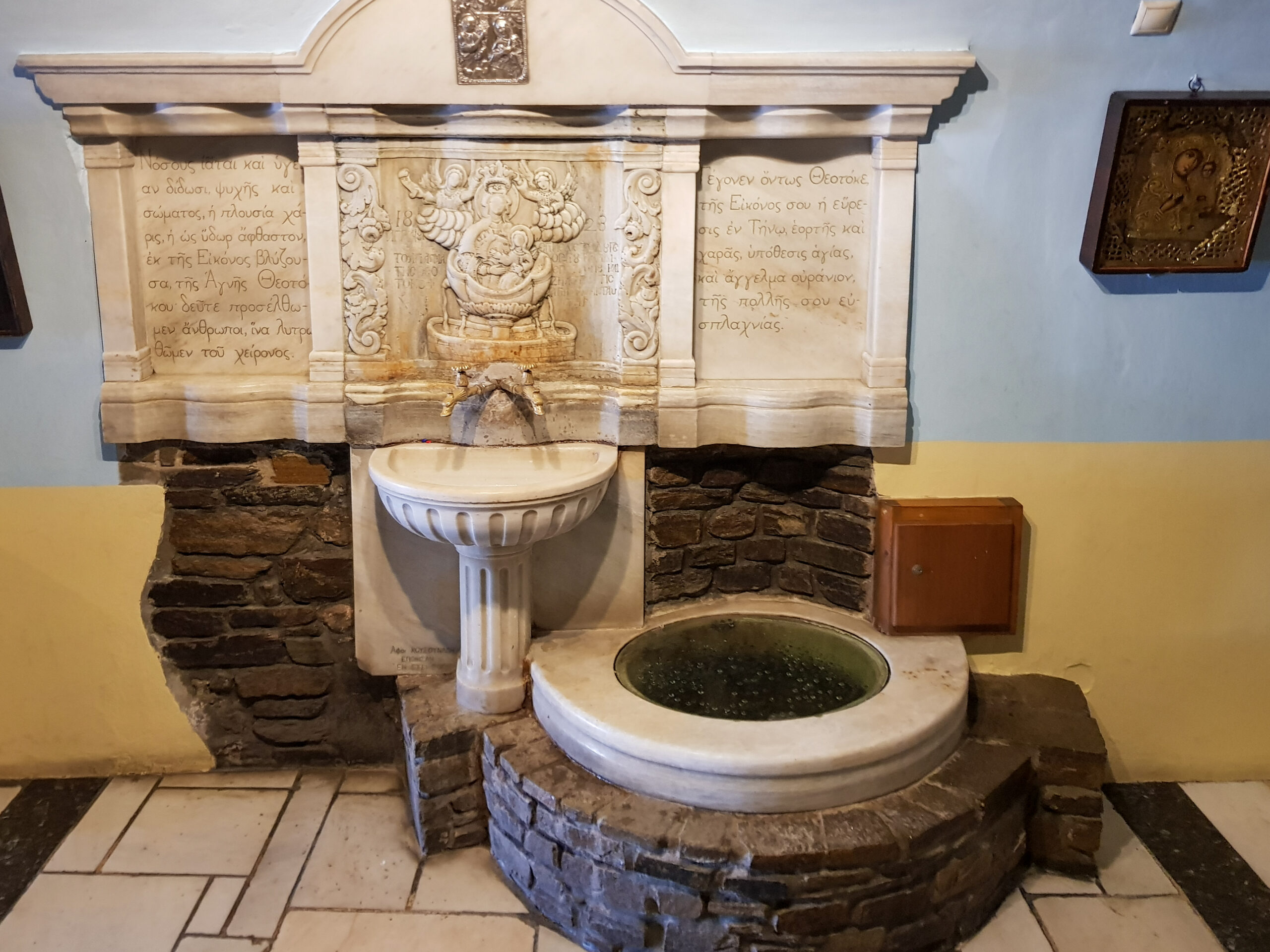 Near the small church of Zoodochos Pigi – Evreseos there is a small mausoleum of great significance for the Greek people. On the 15th of August 1940, an Italian submarine fired a torpedo at the Greek cruiser Elli, which was participating in the Feast of the Dormition of the Mother of God. The ship was anchored in the port of Tinos.

The attack was completely unprovoked and although Greece entered World War II a while later, the sailors which were killed on the ship are considered the first Greek victims of the conflict.

In the mausoleum there is an ossuary in which the remains of the victims of the attack, as well as a piece of the torpedo which hit the cruise and various objects which were found when the ship was recovered from the bottom of the sea in 1955.

Overall, Panagia Evangelistria is a place of pilgrimage comparable to other, more famous pilgrimage sites, such as Lourdes in France, Fatima in Portugal and Jasna Góra in Poland.

Whether you’re an Orthodox believer or not, the visit to this wonderful place of worship will be an experience which will touch your soul forever.