A small community in the village of Lagkadas near Thessaloniki, Greece, perpetuates a tradition whose origins lie back in the ancient times of this region in the Balkans.

Anastenaria, known also as “Pyrovasia”, meaning walking on fire, is a profound ritual, with religious influences, both fascinating and difficult for those outside the community to understand.

The ritual is performed mainly around the celebration of Saint Emperors Constantine and Helen by a group of people keen on preserving this tradition.

Over the course of history

During the migration wave in the 20s, many Greeks were forced to leave Eastern Rumelia, a region now in Bulgaria.

They could not carry many belongings, but they certainly brought part of their ancient traditions, their saint icons that they called “papoudes” (“grandparents”) or “chares” (“joys”), as well as the red scarves – “amanetia”- used during the ritual of walking on ember.

There were periods in hard times when Anasteria could not be continued, but the old, who always kept it in their mind and soul, revived it.  This tradition is kept in several regions in Northern Greece and in some remote villages in Bulgaria.

This ritual symbolizes, as those practicing it say, a physical and spiritual katharsis. At the end of the fire-walking, anastenaris, the active participant to the ritual  “experiences a sentiment of joy, peace, calm and spiritual accomplishment”, says Sotirios Gkaintantzis, president of the Anastenaria Association in Langkadas and leader of the “firewalkers”. 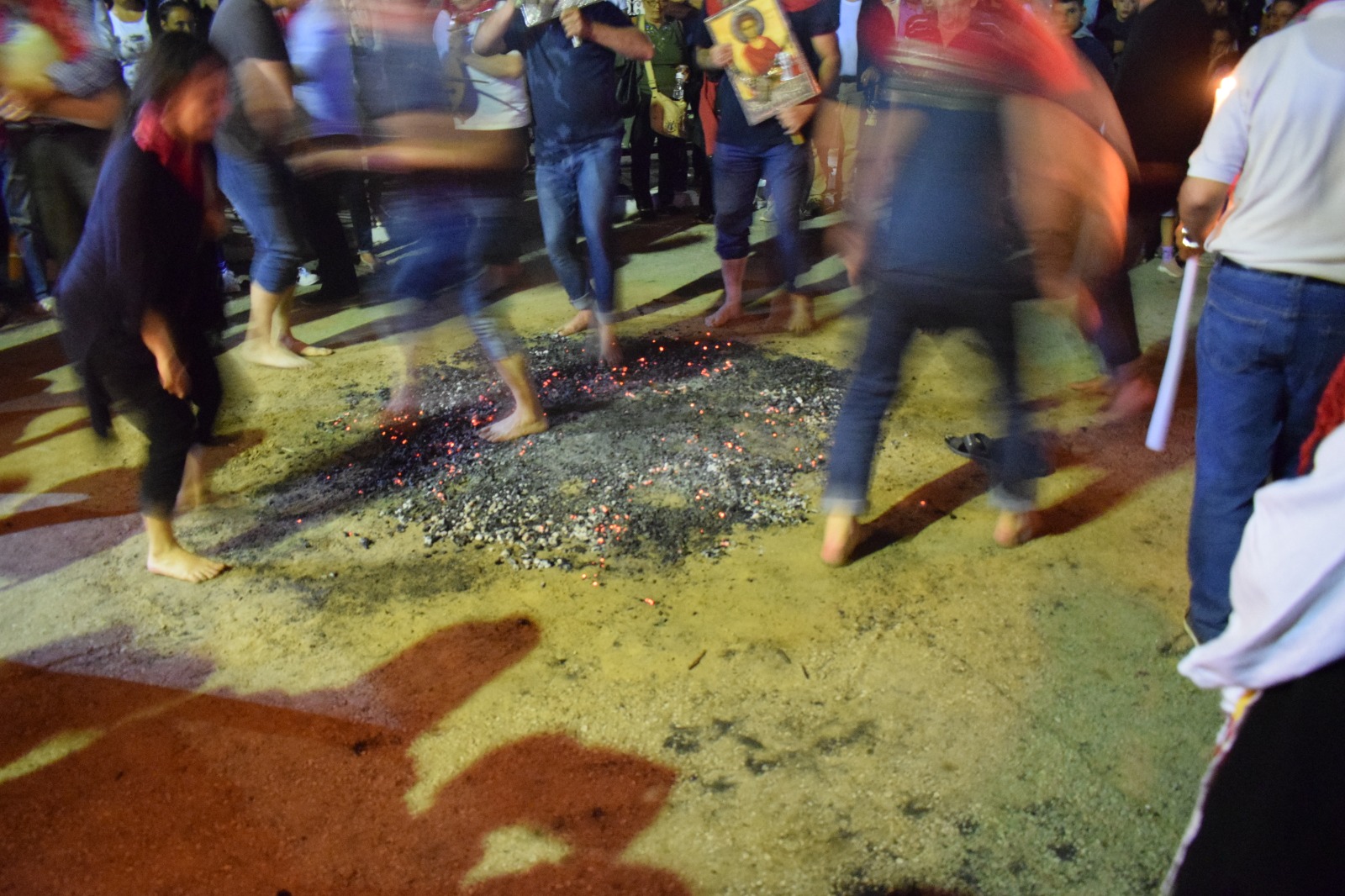 “There is no secret or certain technique to be learned in order to walk on ember. Love, faith, respect, humility, devotion and modesty are traits that could bring people closer to this ritual”, Sotirios Gkaintantzis also explains.

For a member of the community to become Anastenaris – firewalker, he must in the first place participate to all the meetings of the Anastenaris’.

“The essence of the tradition is not the ability to walk on ember. It is not this that makes this tradition so important.”, insists Gkaintatzis.

Quite often in the past some “brave” spectators took off their shoes and walked barefoot on the ember, thus suffering from severe burns.

Fire-walking – behind the scenes

The ritual begins when the “firewalkers” gather and go to a place called konaki. Here they first bless the place and then pray by the tunes of bagpipes, lyre and traditional drums, while the leader of the firewalkers, Archianastenaris, begins a ritual dance, with repetitive movements. Those selected to walk on fire follow him one by one, holding the sacred icons. 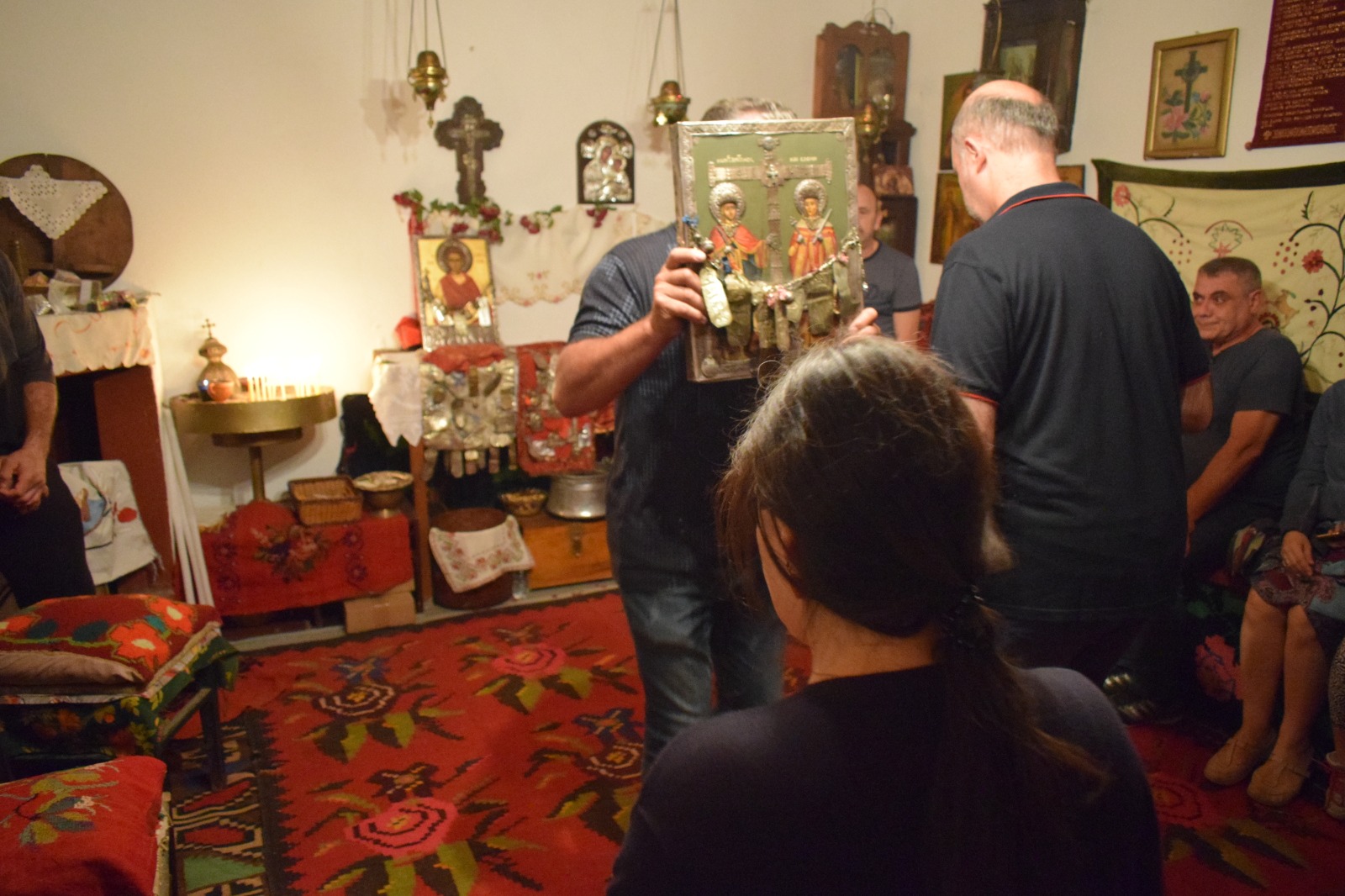 In the meantime, a fire is lit outside, under the supervision of a specially appointed man, who is also in charge of spreading the ember into an even layer.

While the fire burns, the firewalkers perform their dancing for the last time in the konaki, this time barefoot, before taking the “road of fire”. They are wearing the red scarves – the “amanetia” around their necks.

Going out, they head to the ember surrounding the smoking pile several times in a dance. They are led by the Archianastenaris who holds the icon depicting a cross, called Anastenari, which gave the name to the whole ritual.

He makes the sign of the cross over the fire, being follows by the other participants wearing red scarves and holding the “papoudes” icons.

In a highly ceremonial dance, they all walk barefoot crushing the ember. The dance continues while the rhythm becomes gradually obsessive, until all ember is fully extinguished.

Tens of minutes later, all firewalkers leave unharmed, untouched by the heat released by the hot ember. How can this happen? Well, this is the mystery that has crossed the centuries and is waiting to be unravelled.